Iranian Ambassador has presented a copy of his credential to Jeyhun Bayramov.

Minister Jeyhun Bayramov has congratulated Seyyed Abbas Mousavi on the occasion of his appointment as an Ambassador to Azerbaijan and wished success in his future activity.

The sides discussed the development of friendly, fraternal, and cooperative relations between the two countries in the form of mutual respect and support, based on deep historical roots, and exchanged views on ways to effectively implement the issues on the cooperation agenda. The issues of continuing successful cooperation on multilateral platforms were discussed.

Minister Jeyhun Bayramov noted Armenia's continued aggression against Azerbaijan and thanked Iran for always supporting Azerbaijan's just position on the settlement of the Armenian-Azerbaijani Nagorno-Karabakh conflict based on the norms and principles of international law.

In turn, Ambassador Seyed Abbas Mousavi stressed that Iran supports Azerbaijan's position on the conflict and regarding the occupied territories of Azerbaijan, and his country is always ready to assist in resolving the conflict.

The sides also discussed other issues of mutual interest. 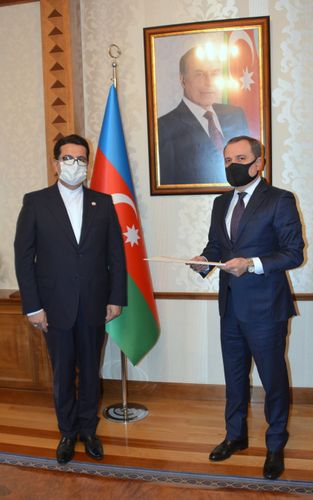