Dramatic footage on social media showed torrents of muddy water surging through the city of Shiraz where most of the deaths occurred.

People were seen clinging to lamp posts and the tops of cars. Hundreds of buildings were reported damaged.

Iran's judiciary said the government's handling of the disaster was being investigated.

The floods struck during the Persian New Year holiday when many government offices were closed.

"Any shortcomings regarding the handling of the floods, failure to provide relief and aid to the survivors will be investigated," judiciary chief Ebrahim Raisi was quoted as saying by the Mizan news agency.

The governor of Fars province, Enayatollah Rahimi, said the flooding was now under control and rescue teams had been deployed to the worst-hit areas.

He added: "I am urging people to stay inside their homes in order to remain unharmed."

Further torrential rain has been forecast for the north and east of the country in the coming hours and days.

Flood warnings have been issued in almost all provinces, including the capital Tehran. 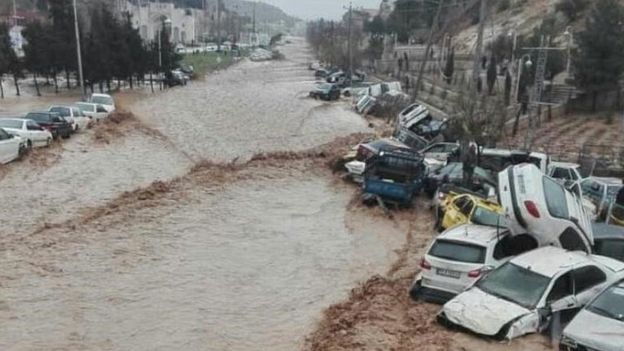