Foreign Ministry: Armenia is seeking excuses for not negotiating

"Today, the only culprit in the escalation of tension in the region, and in general the existence of a "front line" between Armenia and Azerbaijan, is Armenia, which has occupied the internationally recognized territory of Azerbaijan - Nagorno-Karabakh and seven adjacent regions by military means,” said press secretary of the Azerbaijani Foreign Ministry, Leyla Abdullayeva, in connection with the statement by the Armenian Foreign Ministry on the escalation of tension on the front line, ONA reports.

According to her, searching for other perpetrators in this matter means nothing more than self-deception: “After all, the resolutions and decisions of the international community, including the three OSCE Minsk Group co-chairs, which are permanent members of the UN Security Council and other international organizations are well known. As long as the armed forces of the Republic of Armenia are present in the internationally recognized territories of the Republic of Azerbaijan, unfortunately, the likelihood of such incidents is very high. The only way to prevent such cases is to ensure the withdrawal of the Armenian armed forces from the territories of Azerbaijan. Some time ago, the Armenian Foreign Ministry insisted on the unacceptability of “holding negotiations with one hand and opening fire with the other,” however, after this statement, the position of the border checkpoint in the Gazakh region of Azerbaijan was attacked and a soldier of the State Border Service of Azerbaijan was wounded.

“It is apparent that Armenia, while keeping Azerbaijani lands under military occupation with the one hand, seeks to find pretexts for not furthering the negotiations with the other. I would like to bring to attention that Foreign Minister Elmar Mammadyarov stated after the Washington meeting that the situation in the frontline was also not completely calm when the negotiation process on the settlement of the conflict was previously in progress and the main documents were being discussed, but that the negotiations continued irregardless. The representative of the Foreign Ministry noted that the Azerbaijani side will never reconcile with the fact of the occupation of the lands, and the Armenian side should have long understood it: “Only withdrawal of the Armenian armed forces from the territories of Azerbaijan and return of Azerbaijanis displaced from these lands to their homes will lead to a decrease in tensions region, the restoration of sustainable peace, prosperity and well-being,” she added.

Erkan Ozoral: "Armenians do not take a lesson from what happened"

Turkish Ambassador: "Garabagh is Homeland for us just as Anadolu"

Russian political analyst: "Co-chairs should immediately respond to resettlement of Lebanese Armenians in Garabagh by Armenia"

Russian FM: "Armenia and Azerbaijan are interested in normalization of situation"

Azerbaijani FM: "All occupied territories of Azerbaijan will be liberated"

Assistant to President of Azerbaijan: “Russia’s explanation saying as if construction materials were transported to Armenia doesn’t satisfy us”

Presidential aide: It was stated to WHO that the data about coronavirus infection in Nagorno Garabagh should be shown in Azerbaijan’s general statistics”

MFA: We resolutely reject accusations of Armenia against Azerbaijan as violation of international humanitarian law and Armenophobia

Cause of shame of humankind: 28 years past since Balligaya massacre - VIDEO

Turkish Defense Minister: "Armenia bites off more than one can chew" 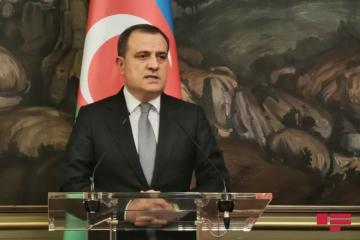 Head of Azerbaijani MFA: “We especially hope that Russia will play a more active role in resolving the conflict”