The Ministers discussed the cooperation opportunities in political, economic, trade, humanitarian and other spheres between Azerbaijan and France, and noted the great potential for the development of cooperation between the two countries.

The sides highlighted the necessity of further deepening of relations and the intensification of high-level mutual visits to this end.

Minister Elmar Mammadyarov and his French counterpart exchanged their views on the current state of the negotiations on the peaceful resolution of the Armenia-Azerbaijan Nagorno-Karabakh conflict with the mediation of the OSCE Minsk Group Co-chairs. The French Minister said that his country would spare no efforts as a Minsk Group co-chair state to resolve the conflict peacefully.

The Ministers exchanged their views on the results of the recent Brussels summit dedicated to the 10th anniversary of the EU Eastern Partnership and the new partnership agreement of strategic importance between the EU and Azerbaijan.

Furthermore, the sides discussed the international and regional issues of mutual interest. 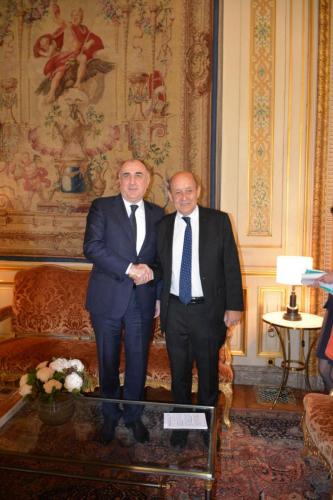