Ministry of Foreign Affairs of Russia has made a post on its official Instagram account on the occasion of May 28 - Azerbaijan's Republic Day, ONA's Moscow correspondent reports.

"mid.rus" website has also shared copies of the document, regarding the declaration of the Democratic Republic of Azerbaijan in 1918 in the French and Arabian languages in its post.

Information on the establishment of the Democratic Republic of Azerbaijan and modern Russian-Azerbaijani relations have also been noted in the post. It has been written that May 28 is celebrated as the Republic Day in Azerbaijan: "Independence Declaration was signed in the hall of the palace of the Caucasian viceroy of the Russian Governer in Tbilisi on that day of 1918.

Azerbaijan is Russia's important strategical partner. Relations between Moscow and Baku rely on principles of sovereign equality, non-interference to internal affairs, respect to each other's interests, friendship, and kind neighborhood.

Russia is one of the main trade partners of Azerbaijan. The volume of trade turnover between two countries has been USD 3.2 bln in 2019, which is 27.4% more in comparison with 2018. 950 joint companies are acting in Azerbaijan. Russia invested in Azerbaijan USD 4.5 bln., while Azerbaijan invested in Russia USD 1.5 bln.

Action Plan, aimed at raising strategical cooperation between Russia-Azerbaijan to a new level by quality until 2024 is being realized productively. New road map (it is the sixth one) on the cooperation in the field of innovative development and digital economy is being worked out.

Open and reliable dialogue between Russian President Vladimir Putin and Azerbaijani President Ilham Aliyev strongly gives impetus to relations. The exchange of visits between heads of defense bodies of both countries is regularly held. The prospective fields of the military-technical cooperation for the upcoming period have been determined.

Today Russia and Azerbaijan closely and actively cooperate in political, commercial, economics, humanitarian, and other fields. Azerbaijan traditionally supports Russia, in 2019 Azerbaijan has been one of the co-authors of Russia's resolution project entitled "Combatting glorification of Nazism and the spread of Neo-Nazism and other practices that contribute to fuelling contemporary forms of racism, racial discrimination, xenophobia, and related intolerance" in the General Assembly of the UN", noted in the post.

Furthermore, cooperation between two countries in humanitarian and cultural fields has also been mentioned in the post. It has been noted last year Russia's Culture Days were held in Azerbaijan, organization of Azerbaijan Culture Days in Russia is planned this year. 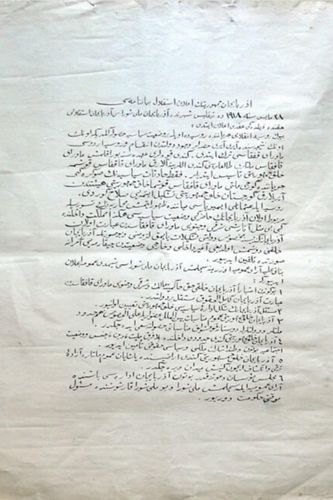