Washington hosts “Contract of the Century: Building on 25 Years of Success” forum

Organized by the Caspian Policy Center and the U.S. Chamber of Commerce, the “Contract of the Century: Building on 25 Years of Success” forum was held on November 21 in Washington, ONA reports.

Addressing the opening of the forum, Afgan Niftiyev, director of the Caspian Policy Center, said that the Century Treaty, signed on September 20, 1994, opened the Caspian's oil reserves to the world.

Azerbaijani Energy Minister Parviz Shahbazov said that the main task in our country is to turn oil capital into human capital.

US Deputy Secretary of Energy Mark Menezes said their goal is to support and assist countries in diversifying their suppliers to promote their independence.

Former US Ambassador to Azerbaijan, a member of the Caspian Policy Center Board Robert Sekuta said the signing of the Century Treaty between Azerbaijani and international oil companies opened the way for other major oil and gas contracts.

Azerbaijan's ambassador to the US Elin Suleymanov said that after the "Contract of the Century", Azerbaijan began to act as a gateway to the Caspian region.

The award on the 25th anniversary of the "Contract of the Century" was presented to Francisco Fannon, US Deputy Secretary of State for Energy.

Discussion panels were also organized within the forum. 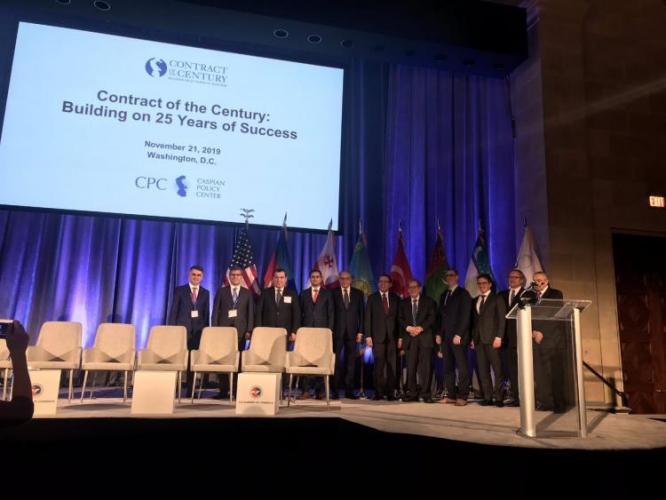