The number of confirmed cases of the virus in China has risen to 7,711 and infections have been reported in at least 15 other countries, APA reports.

But not only has the virus has spread, so too has misinformation.

Numerous conspiracies have appeared since the outbreak - not to mention dubious health advice.

The BBC Monitoring team has been taking a look at where these have all come from.

As the death toll from the coronavirus outbreak continues to rise, social-media users have been sharing advice on ways to treat or prevent the disease.

But at least some of the tips have proved to be misleading or false.

One such claim - shared 16,000 times on Facebook - advises users in the Philippines to "keep your throat moist", avoid spicy food and "load up on vitamin C" in order to prevent the disease.

The information is said to be from the country's Department of Health but it does not match the advice on the DOH website or its official press releases on the outbreak.

Journalists and fact-checkers have found posts with identical or slightly altered wording - said to be from local health authorities - are also being circulated on Facebook and WhatsApp in Canada, Pakistan and India.

As was the case with the Philippines, the advice does not match the information provided by health officials in those countries.

Another unsubstantiated claim shared online suggests avoiding cold or preserved food and drinks, such as ice cream and milkshakes, for "at least 90 days".

It accompanied the post with a video of a parasite being removed from a person's lips, suggesting the procedure was somehow related to the new coronavirus.

But, as Altnews fact-checkers pointed out, the video is in fact three months old and unrelated to the virus.

Facebook has since marked the ForChange post as "false information" but dozens of identical messages are still being circulated on the platform.

The World Health Organization's official advice for the public on the new coronavirus suggests only avoiding consuming "raw or undercooked animal products".

There is currently no vaccine against the virus but standard recommendations to prevent infections apply.

covering your mouth and nose with a tissue when coughing and sneezing or, failing that, with the crook of your arm

avoiding close contact with anyone showing symptoms of a respiratory illness, such as coughing or fever

From the very beginning people speculated online about the origin of the coronavirus. This was exacerbated by a slew of videos said to be showing Chinese people eating bats amid the deadly outbreak in Wuhan.

One such clip shows a smiling Chinese woman holding a cooked bat on camera, before admitting it tastes "like chicken meat". The video prompted outrage online, with some users blaming Chinese eating habits for the outbreak.

But the video was not shot in Wuhan, or in China for that matter. Originally filmed in 2016, it shows popular blogger and travel show host Mengyun Wang during a trip to Palau, an archipelago in the western Pacific Ocean.

The clip resurfaced on social media after cases of the new coronavirus emerged in Wuhan late last year.

Following online backlash, Ms Wang apologised, saying she was "just trying to introduce the life of local people" to the audience and had not known that bats could be a virus carrier. Her video has since been taken down.

The new coronavirus is believed to have emerged from illegally traded wildlife at a seafood market in Wuhan. Although bats have been named in recent research from China as a possible source of the virus, bat soup is not particularly commonplace in the country and the investigations into its exact origins continue.

As the United States reported its first case of the coronavirus last week, several patent documents started to circulate on Twitter and Facebook that at first glance appear to suggest experts have been aware of the virus for years.

One of the first users to float these allegations was conspiracy theorist and YouTuber Jordan Sather.

In a lengthy thread that has been retweeted thousands of times, he shared a link to a 2015 patent filed by the Pirbright Institute in Surrey, England, that talks about developing a weakened version of coronavirus for potential use as a vaccine to prevent or treat respiratory diseases. The same link has also been widely circulated on Facebook, mainly in conspiracy and anti-vaccination groups.

Sather used the fact that the Bill & Melinda Gates Foundation is a donor to both Pirbright and vaccine development to suggest that the current outbreak virus has somehow been deliberately manufactured to attract funding for the development of a vaccine.

"And how much funding has the Gates Foundation given to vaccine programs throughout the years? Was the release of this disease planned? Is the media being used to incite fear around it?" Sather tweeted.

But Pirbright's patent is not for the new coronavirus. Instead, it covers the avian infectious bronchitis virus, a member of the wider coronavirus family that infects poultry.

As for the speculation about the Bill & Melinda Gates Foundation, Pirbright spokeswoman Teresa Maughan told Buzzfeed News that the institute's particular work with the infectious bronchitis virus was not funded by this foundation.

Another baseless claim that has gone viral online suggests the virus was part of China's "covert biological weapons programme" and may have leaked from the Wuhan Institute of Virology.

Many accounts pushing the theory cite two widely-shared Washington Times articles both of which quote a former Israeli military intelligence officer for the claim.

However, no evidence is provided for the claim in the two articles, and the Israeli source is quoted as saying that "so far there isn't evidence or indication" to suggest there was a leak.

The two articles have so far been posted to hundreds of different social accounts to a potential audience of millions.

The Daily Star published a similar piece last week, claiming the virus might have "started in a secret lab". However, it has since amended the piece to add there is no evidence for the claim.

Another claim inaccurately linked the virus to the suspension of a researcher at Canada's National Microbiology Laboratory.

Virologist Dr Xiangguo Qiu, her husband and some of her students from China were removed from the lab following a possible "policy breach," according to a report by Canada's national broadcaster CBC last year. Police told CBC News there was "no threat to public safety".

Another report said Dr Qiu had visited the Wuhan National Biosafety Laboratory of the Chinese Academy of Sciences twice a year for two years.

A tweet with more than 12,000 retweets and 13,000 likes - claimed without evidence that Dr Qiu and her husband were a "spy team", had sent "pathogens to the Wuhan facility", and that her husband "specialised in coronavirus research".

None of the three claims in the tweet can be found in the two CBC reports and the terms "coronavirus" and "spy" do not appear even once in either.

CBC has since reported that these claims are baseless.

Different versions of a "whistleblower" video, alleged to have been taken by a "doctor" or a "nurse" in Hubei province, have racked up million views on various social media platforms and mentioned in numerous online reports.

The most popular version was uploaded to YouTube by a Korean user, and included English and Korean subtitles - the video has since been taken down.

According to the English subtitles, the woman is a nurse in a Wuhan hospital. However, she does not claim to be either a nurse or a doctor in the video at all. This seems to be merely an assumption on the part of those who have uploaded various versions of the video to social media.

The woman, who does not identify herself, is wearing protective suit in an unknown location. However, her suit and mask do not match the ones worn by medical staff in Hubei.

Due to a lockdown being enforced by the authorities, it is difficult to verify videos from the province. But she makes a number of unsubstantiated claims about the virus, making it unlikely for her to be a nurse or a paramedic. 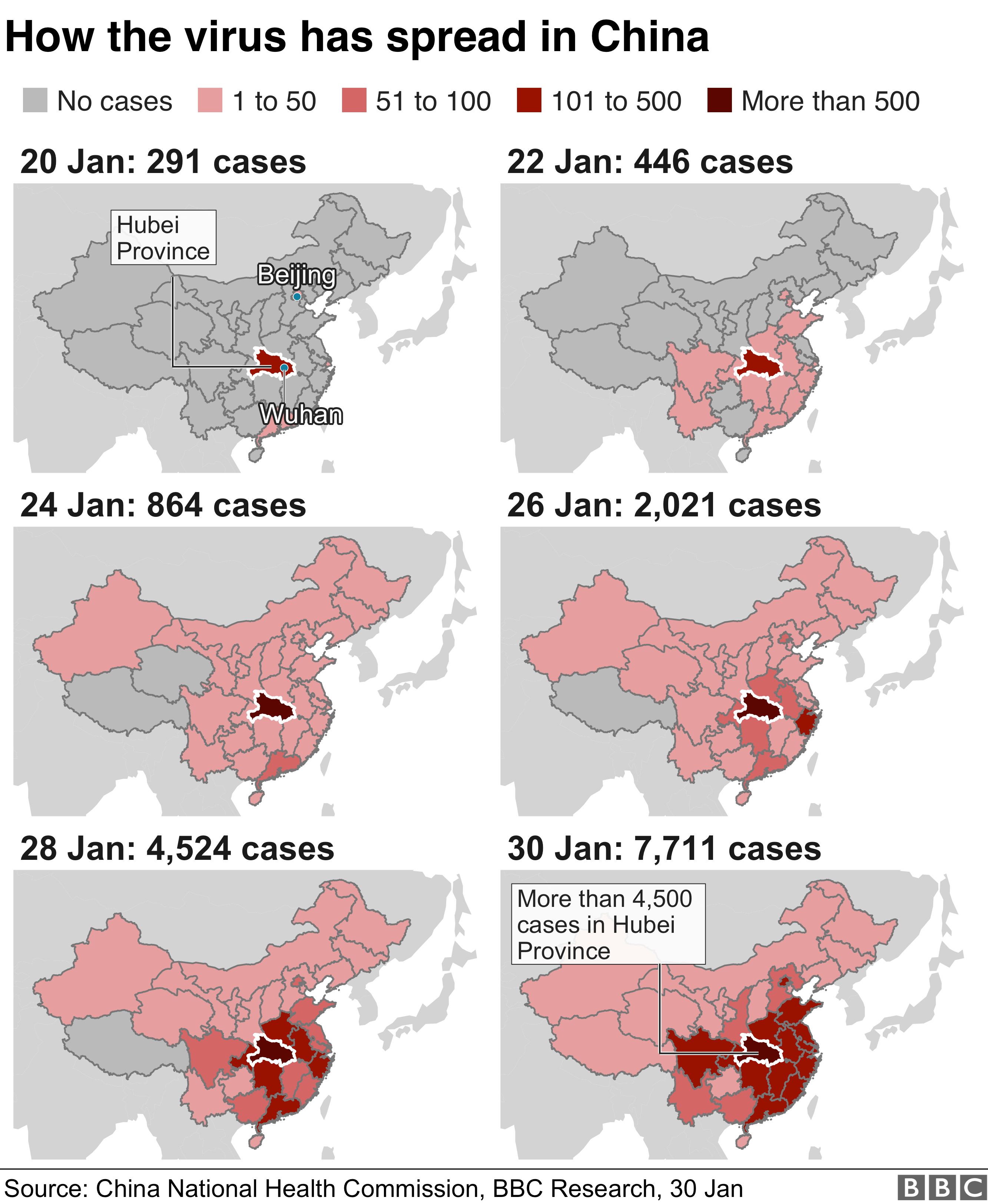 She also claims the virus has a "second mutation", which can infect up to 14 people. But the World Health Organization has preliminarily estimated the number of infections an individual carrying the virus can cause is 1.4 to 2.5

"She doesn't sound like someone from [a] medical professional background," Muyi Xiao, a Wuhan native and the visuals editor for the ChinaFile online magazine, told the BBC.

Although the exact location of the video is unknown, it is likely that the woman is a Hubei resident sharing her personal opinion about the outbreak.

"I think there is [a] possibility that she thinks she is telling the truth. Because no one knows the truth," Badiucao, a Chinese political activist currently based in Australia, told the BBC.

"No transparency [has] just left people guessing and panicking."