At least 23 people, some children, have been killed and more than 40 injured after tornadoes struck Lee County in eastern Alabama, authorities said, ONA reports citing the Associated Press.

Sheriff Jay Jones told the Associated Press the toll could rise, but rescue efforts had to stop until dawn due to the danger of searching in the dark.

"We’ve done everything we feel like we can do this evening. The area is just very, very hazardous to put anybody in to at this point in time — debris everywhere and it’s just… just some mass damage to structures and residences in the area," the sheriff was quoted as saying by the channel WBRC earlier in the day.

"The challenge is the sheer volume of the debris where all the homes were located," he told CNN.

It is unknown how many are injured. Authorities have blocked off the area.

The National Weather Service (NWS) classified the first tornado to strike as at least an EF-3 - meaning winds of up to 165 miles per hour (266km/h) - carving a path at least half a mile (0.8km) wide.

The sheriff also said that people were still being reported missing, and a more organised search would be conducted in the morning. According to Lee County Coroner Bill Harris, quoted by the broadcaster, there are both children and older adults among the victims. 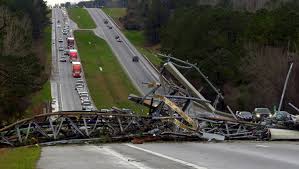 State Dept: US will require Chinese diplomats to report contacts with American officials

Shooting leaves one dead in California