At least 70 people have been killed after gas cooking stoves exploded and set fire to a crowded train in Pakistan, ONA reports citing Daily Mail.

More than 30 people were wounded, some critically, in the blaze which started when two gas stoves being used by poorer passengers to cook breakfast on Thursday morning blew up.

The fire, which was fuelled by cooking oil the passengers were carrying, engulfed three carriages of the train, which was carrying people from Karachi to a religious conference in Rawalpindi.

As smoke and flames tore through the train, desperate passengers threw themselves out of the moving carriages - many of them jumping to their deaths.

Children were among those killed in the blaze, according to local reports.

At least 62 people were killed and over two dozen injured when a fire broke out Thursday morning on a passenger train in northeast Pakistan, ONA reports citing Eurasia Diary.

The fire started when a gas cylinder exploded in a carriage of a train carrying members of Tablighi Jamat -- a non-political global Islamic missionary movement -- near the Rahimyar Khan district in the Punjab province, city police chief Amir Taimoor Khan told reporters.

At least 30 people were injured and more than a dozen of them were in critical condition, Taimoor said, saying he feared the death toll would rise.

Railway Minister Shaikh Rasheed Ahmad told reporters the blast occurred after some of the Tablighi members lit a stove connected to a gas cylinder to prepare breakfast.

The fire swept through two other carriages, forcing many passengers to jump off the moving train, which led to many of the deaths and injuries, he said.

Pakistan has had a long history of train accidents, mainly due to lack of safety measures.

This July some 21 passengers were killed and over 80 injured after two trains collided in the nearby Sadiqabad district.

At least 25 people have died, with many more injured in a massive fire on the Tezgam Express - a train en route from Karachi to Rawalpindi, ONA reports citing Sputnik.

"Two cooking stoves blew up. They were cooking, they had [cooking] oil which added fuel to fire", Railways Minister Sheikh Rasheed said

Officials previously reported that the accident occurred near the city of Liaquatpur in Punjab, and had been caused by an explosion of a gas cylinder that was being transported by one of the passengers.

​As a result of the blast, three carriages have been destroyed by the flames. According to Baqir Husain, head of the district rescue service, many people died because they jumped outside the train in a bid to flee the blaze.

Prime Minister Imran Khan has, meanwhile, expressed his condolences to the victims and their families ordering to provide the best possible medical help for the wounded.

The officials also stated that the incident won't affect the schedule. as the railway will be operational again in just several hours. 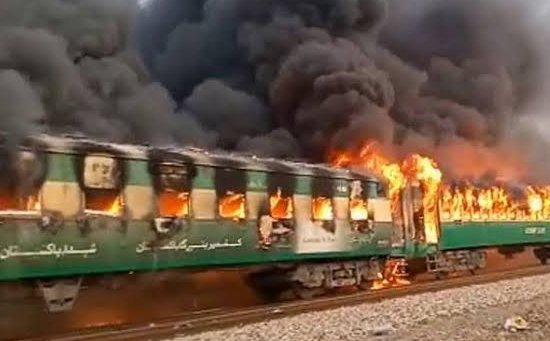